It has been another tough year for Rangatira Investment’s two popular tourism assets, with the cost of travel to New Zealand and China’s absence the major headwinds ahead.

The Wellington-based investor owns 100% of Auckland’s Rainbow’s End and 51% of Rotorua’s Polynesian Spa, with the attraction’s founders, the Lobb family, owning the remaining.

Rangatira said in its annual report for the year to March 2022 released on Friday that both attractions had found lockdowns over the past year difficult, with the valuable Auckland market stuck at home during the Delta outbreak from mid-August to mid-December.

While it did not divulge performance figures for its tourism assets, Rangatira said its net profit saw “mixed results across the portfolio with both Rainbow’s End and Polynesian Spa finding conditions hard through the lockdowns, as borders were largely closed throughout the year”.

The investor hoped to see improvements at the two operations as the borders fully open and the country moves away from lockdowns, “although the tightening economic sentiment may well lead to a more subdued and slower return to historic levels in both international and domestic tourism”.

Rangatira chief executive Mark Dossor told the Ticker it was difficult to say when the tourism industry would return to pre-Covid levels of activity.

“My observation is that it’s going to come back in the next 24 to 36 months but maybe not to the level it was in 2019 – something less than that,” he said.

“The headwinds though that people face, with New Zealand in particular, are higher costs of travel and also the biggest trigger really is when China opens. Certainly for Polynesian Spa, that was 30% of their trade, and I’m sure that’s the case for a lot of tourism operators.

“So, the biggest uncertainties are when it all comes back to normal around flight costs and China. In the meantime, how much people can afford what they used to do, given higher interest rates and inflation.”

On the operations side, staffing and cost inflation were ongoing challenges with the latter putting pressure on prices.

“Tourism gate prices cannot be immune from inflation. Wage costs are going up 10% which is one of the highest costs,” Dossor said.

“At Polynesian Spa we’ve held [ticket prices] reasonably but we’ve probably changed the product mix to make sure the whole facility is being utilised while maintaining the average [ticket price] the same, if not slightly higher.”

The two attractions had seen significant development during the pandemic with investment ongoing. Both received $500,000 from the government’s Strategic Tourism Assets Protection Programme.

“We have used this period to do a lot more R&D and onsite improvements, particularly at Rainbow’s End,” Dossor said.

“When you’ve got fewer customers on-site it’s easier to do that, and as a result, both products have been dramatically improved. It’s really good to see.”

Rangatira was now raising up to $50m to help drive growth. So, will it be looking for tourism assets in the recovery?

“We’ve taken a really decent look at tourism and I think it would be a pretty good sector if you can get the right assets and you’ve got a longterm view,” Dossor said.

“I think New Zealand is always going to be on people’s list of countries to come to and that’s only been enhanced through the last two or three years. So, I’m sure it will continue to be a big export revenue earner for New Zealand in the future.”

Polynesian Spa marks its 50th year in 2022, with Rangatira investing $42,000 in 1972 to partner with the Lobb family and launch one of New Zealand’s first commercial geothermal spa facilities. 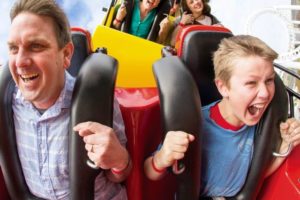 29 May 2018  Rangatira: Profit up but weather affects Rainbow’s End